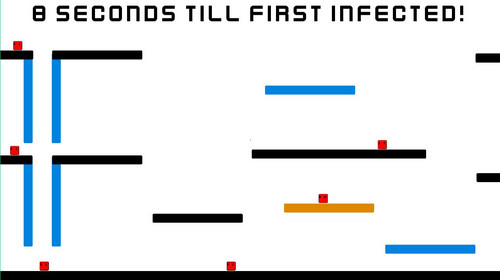 Infected 2D was my first game made in unity outside of college, I saw someone else with the idea of a tag game on a game engine called Construct 2 by Scirra and at that time I was really wanting to start a project, however, I could not do that complicated art work, so I decided with this. I first started creating it in Construct 2 however the free version was very limited and I could not finish all the functionality I wanted in it. In college for my work, I switch over to Unity  (5.4.1f1)for my final major project when I had learned Construct 2 the whole year, that went well so I decided to bring my assets I made over into Unity and try completing it. Now 7 weeks later I have finished all the main functionality I wanted to have. Artwork and coding were done by me in Photoshop and C#, music from Ben Soun

Infected 2D is a action game where you play against your friends local split screen. 2-6 Player with controller support